“Follow your passion!” has long been the advice given to high school students in choosing a career. It still is, but in many cases this advice is countered by pressure to do otherwise. This 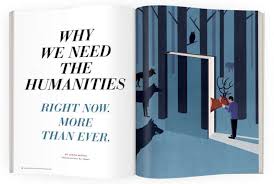 pressure comes from the power of the STEM* movement in American higher education. However, this blog post explains why a major in the humanities is a viable solution for high school students who can’t select a career with sufficient confidence that it’s the right choice.

The bias in favor of STEM education can detract from the integrity of your College List, which is comprised of the colleges to which you’ll apply in senior year. The College List, when properly developed, is an important contributor to the success of your college admissions campaign. In building the list, you’ll be advised to set your educational goals beforehand, including your future career, so that you can select a major that will enable you to pursue that career. Then, knowing your major, it’s assumed that you’ll be better able to identify those schools that fit you best — the ones that belong on your College List.

This sequence — “career-to-major-to-colleges” — is a sound, pragmatic protocol — if you can follow it! But it isn’t feasible for many students. As a high school student, identifying with confidence which career is best for you is a daunting task. The lucky few already know what they want to pursue as a career, but most do not. In addition, the pandemic has caused the outlook for many careers to be clouded by economic uncertainty. A career that you might consider attractive now may be much less so in five or six years. And some of the hottest careers that will be open to you in 2025 don’t even exist yet.

Because there are advantages in identifying your career while in high school, you may be pushed to choose one before you’re ready, especially a STEM career, due their perceived practicality. Resist this pressure. There’s an alternative that you should consider if you’re unsure which career may ultimately suit you best.

The Emphasis on STEM Disciplines as Majors

In order to maintain America’s edge in the STEM fields, the focus in academia has shifted toward those disciplines. Due to the needs of America’s high-tech workforce, emphasis has been placed on graduating STEM majors who can satisfy the demand for entry-level professionals in those fields. This objective is worthy in and of itself, but there has been an unfortunate side effect.

The proliferation of STEM-centric curricula has driven some students, often against their desire and best interests, away from majoring in the humanities. Moreover, many colleges have reduced the number of traditional required courses in the humanities to allow for more courses in STEM subjects. College administrators are concerned that requirements in the humanities, to the extent that they displace STEM courses, diminish the future employability of graduates.

What Are the Humanities?

The humanities, as the term implies, is the study of the human condition from a number of different perspectives. They are a subset of the traditional Liberal Arts, which, since classical times, has included the sciences, arts, and humanities. In the United States, the most common majors in the humanities are:

The Role of the Humanities in American Education

Historically, American colleges were not founded to train students for a specialized career in one field. Rather, their mission was to expose students to a broad intellectual tradition. This was considered essential to create effective leaders for the community, commerce, and public and private institutions. This philosophy may seem impractical in a modern society as complex as ours, but it remains a sound design for a robust education because it benefits students regardless of what profession they enter.

The humanities teach two vital abilities that are missing from a purely STEM curriculum: communication and critical thinking. In the humanities, students learn to fully engage with the material, consider it from all angles, solve problems creatively without bias, express themselves well, adapt to new situations, and work collaboratively.

The Humanities and the U.S. Job Market In today’s fast-changing environment, large organizations, even those whose primary business is STEM-related, aren’t looking for leadership candidates who know only one subject, however thoroughly they may know it. They’re seeking promising leaders who are innovative, creative, and possess an expansive mind-set, characteristics that are more closely associated with humanities graduates than STEM graduates. A study conducted by the Association of American Colleges and Universities found that 93 percent of senior executives agreed that, “A demonstrated capacity to think critically, communicate clearly, and solve complex problems is more important than a job candidate’s undergraduate major.” The humanities hone the skills that large organizations seek in leaders.

Students and their families are often drawn to STEM fields for financial reasons under the assumption that salaries are higher. However, according to the New York Times, “The top 25 percent of history and English majors earn more than the average major in science and math during their careers, and the bottom 25 percent of business majors make less than the average of those majoring in government and public policy.”

College graduates must compete with their peers to secure their first job in their profession, an undertaking that has become increasingly difficult. A delay in obtaining a starting job is a concern for students who, like you, must anticipate which careers will even be viable several years from now. Fear of underemployment is justified.

As you grapple with this puzzle, bear in mind that the number of jobs that require skills developed in the humanities, especially interpersonal communications and the ability to solve complex, multi-dimensional problems, will be greater than the number of jobs that require highly specialized knowledge. A broad-based exposure to ideas will continue to be valued in new management-track hires.

In the future, the best and most plentiful jobs will go to those who can collaborate widely, think broadly, and challenge conventional wisdom — precisely the capacities that an education in the humanities develops. Don’t let yourself be discouraged from pursuing a major in the humanities if that’s what you truly love.

*STEM is an abbreviation for Science, Technology, Engineering, and math.