If you’ve been accepted by a college through its Early Decision (ED) plan you may consider yourself fortunate, as you should.  You’ve applied to a school that’s at or near the top of your target list because the likelihood of acceptance for ED applicants is higher than the overall rate 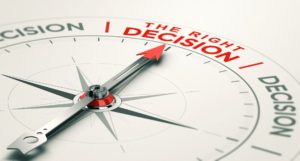 for the college. You’ve been admitted before most of your fellow students have even submitted applications. You can rest easier than your classmates and enjoy the rest of your senior year without the stress of admissions hanging over your head!

And yet, some students who have been accepted through an ED plan want to renege on their agreement later because events have transpired that cause them to regret their commitment. At that point they want to know if their ED agreement is binding and if they can disregard it without consequences.

The answer isn’t simple. You, your guidance counselor, and your parents signed an agreement that stipulates that you understand that you’re committing to attend the institution if admitted. So, yes, it’s binding. But an ED agreement isn’t a contract that, if breached, can subject you to civil liability.

Consider the agreement that you’re asked to sign. A majority of the colleges that offer ED options do so under the Statement of Principles of Good Practice of the National Association for College Admissions Counseling (NACAC), which guides the institutional treatment of students. Section II of the NACAC document, titled “The Responsible Practice of College Admission”, includes this definition:

“Restrictive early application plans — Early Decision (ED): Students commit to a first choice college and, if admitted, agree to enroll and withdraw their other college applications. This is the only application plan where students are required to accept a college’s offer of admission and submit a deposit prior to May 1.”

When you submit an ED application, what you’re agreeing to do is clear. While pursuing admission under an ED plan, students may apply to other institutions under an Early Action (EA) plan, but they may submit only one ED application. If an ED applicant is not admitted but is deferred to the Regular Decisions (RD) cycle, they’re immediately released from the ED agreement and are free to accept any other colleges’ offer of admission.

There are changes in a student’s circumstances that will induce a college to release him or her from their ED commitment. Before we review these circumstances, you should understand what may happen if you  simply ignore an ED agreement after having been admitted.

What can happen if you ignore an Early Decision agreement

You may wonder why a college administration even cares if you break your ED agreement, given that many of them admit only a small percentage of applicants. They can readily fill your slot with another well-qualified applicant. Administrators care because they use ED as a tool to improve the quality of their freshmen classes and raise their yield rate. Yield rate is the percentage of applicants who are offered admission, accept it, and go on to attend the college. It is an important variable in a college’s planning, and colleges strive to keep it high. If applicants admitted under an ED plan can renege with impunity, the purpose of an ED plan is defeated and its value to the institution is nullified.

At the same time, colleges are reluctant to compel students to attend their school if they don’t want to be there. So the college whose ED acceptance you turn down isn’t going to come after you with bloodhounds and a posse. “In some ways, early decision is a gentleman’s agreement”, according to Dave Tobias, vice president of enrollment for Ursinus College in Pennsylvania.

Most importantly, when a student backs out of ED agreement without cause, it raises questions about the student’s ethics that could impact decisions elsewhere. Some guidance counselors and colleges take steps to discourage reneging on ED agreements. For example:

Legitimate reasons for backing out of an Early Decision

As noted above, there are a number of legitimate reasons why a college will release an applicant from an ED commitment without any negative repercussions. Below are a few common examples:

An ED agreement is a serious undertaking, often among the first formal commitments you’ll make in your lifetime. You should make a good faith effort to stick to it.  Klaar College Consulting can help you understand the commitment you’re making. More importantly, i your decision will be part of a sound admissions strategy that we co-develop with you to help ensure  the success of your college admissions campaign.